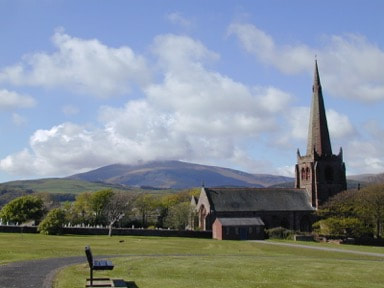 The restoration of Norman Nicholson’s lifelong home will set the standard for quality as a jewel in Millom’s designated conservation area. It will celebrate the life and works of the poet Norman Nicholson, his home town of Millom, its people, its industrial heritage, and the local landscape.
​
Nicholson’s house will serve the local community and attract visitors, expanding Cumbria’s western peninsula tourism opportunities. It will draw on its proximity to the UNESCO Lake District National Park, work in partnership with organisations, and develop county and national networks, to promote the area, its natural beauty and its fascinating history.

Visitors experiencing the house’s facilities and services will be immersed in the ordinary life of a 20th century family living behind a busy shop front, sparking nostalgia, curiosity and respect for our nation’s entrepreneurial heritage.

Its facilities and activities, underpinned by digital technology, will generate income to self-sustain the house and its activity programme long-term. An increase in visitors will have a positive economic impact on other local businesses.

An inclusive activity programme will operate to promote learning, social interaction and wellbeing, specifically literacy skills, the arts, local heritage and environment. The house and activities will appeal to a diverse range of people and particularly those with an interest in Norman Nicholson, literature in general, social history, the natural environment, ecology, and the Lake District.
​
People will also be inspired to consider the human challenges reflected in Nicholson’s poetry, including many which are still relevant: a sense of place and belonging; globalisation; managing change; and an urgent need to care for the environment.

The restoration of the house will create opportunities to enrich lives, promote connections and personal wellbeing, increase skills and knowledge, and raise aspirations.