“I’m grateful for the roots. I don’t think I would have developed as a poet anywhere else. I’ve had this very special material, though it took me such a long time to realise that it was there.” ​        Norman Nicholson in Pendennis - Observer Review 1981
​The celebrated 20th century poet Norman Nicholson was born at 14 St George’s Terrace, Millom, Cumbria (or Cumberland, as it was when he arrived in 1914). It remained his home for the rest of his life. From here he achieved international standing as a poet, dramatist and critic, receiving both the OBE and the Queen’s Medal for Poetry. He died in 1987.
​
This three-storey Victorian terraced house was the home of Nicholson’s father, Joseph, who ran a gents’ outfitters business from the front room with his family, including Norman, living behind and above the shop. After Joe’s death in 1954 it became the home of Norman and his wife Yvonne. Following Norman’s death No 14 was sold and for many years a cafe operated on the ground floor with the upper floors unoccupied. The house was sold again in 2018 and a physiotherapy practice currently operates from the ground floor, with the top two floors still unoccupied.

The Norman Nicholson House Community Interest Company (CIC) was set up in 2020 by the Norman Nicholson Society, with the aim of progressing the Society’s long-held ambition to buy and renovate the property. Our vision is to recreate the appearance of the house as it was when Joe’s business was flourishing and Norman was at his most productive as a witer. Our plans also include a cafe which will double as a space for community events, accommodation for tourists and writers-in-residence, and displays of Nicholson memorabilia. This will create a place which will attract locals and visitors, make a vibrant contribution to the community of Millom, and become a worthy memorial to the remarkable man who lived here.

We are currently applying to a variety of funding organisations for the money to convert our ambitions into reality.

On this website you can find out more about the house and the CIC. Comments, suggestions and offers of help are welcome, via the Contact page.
​
There is much more information about Nicholson and his work on the website of the Norman Nicholson Society. 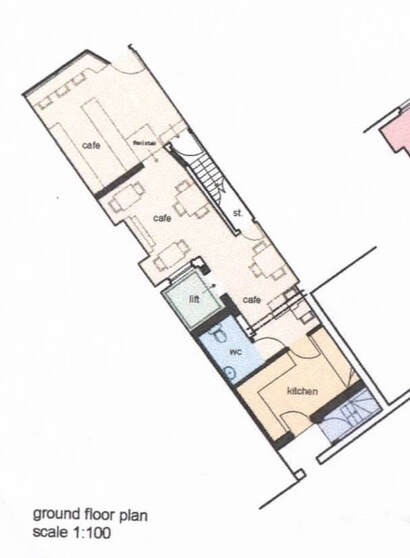 Let's lift this plan (by JCA, Cartmel) off the drawing board and make it reality!

​THANK YOU to everyone who has helped us get this far:

The National Lottery Heritage Fund for funding architects' plans, feasibility study and specialist reports
The Arts Council for a generous contribution to the first two-day Norman Nicholson Festival in 2019
Millom Town Council for their consistent support and a donation towards the Festival in 2019
Millom CGP Trust for a donation towards the Festival in 2019
The Norman Nicholson Society
Our wonderful patrons who have lent their names to our project
Trudy Harrison MP
Katie Read, Tourism Development Officer, Copeland Council
Our friends in the media especially BBC Radio Cumbria, NW Mail, and Around the Combe
Millom & Haverigg Civic Society
Heritage Trust Network
Cumbria CVS
Cumbria Arts & Culture Network
Alliance of Literary Societies
LitHouses
Mike Darwell of John Coward Architects and the many individuals who have helped, guided and encouraged. Don't stop now!
​A special thank you to the late Peggy Troll, a true inspiration